The skin is an ecosystem where about 1.000 microbe species live in symbiosis with each other and with the host. The balanced pattern of commensal and symbiotic microorganisms forms the skin microbiota, essential for skin health. Many of these microbe communities are harmless and provide functions not evolved by human genome. Symbiotic microbes support skin barrier function, modulate immune response protecting the skin against pathogens, allergens etc.

Since the skin is a finely organized ecosystem, a perfect balance between host and microbe communities exists to preserve homeostasis and wellness. Disruption of this delicate balance can induce perturbations in skin barrier function, onset of dermatological disorders associated with photoaging, acne, eczema, psoriasis, dermatitis etc. Moreover, significant change in the composition and distribution of skin microbe communities occurs during aging, thus affecting balance between host and microbiota.  Solutions aimed to gradually preserve its balance became one of cosmetic industry priorities.

From probiotics to postbiotics

Recently, living probiotics, tyndallized bacteria, lysates or prebiotics use has been blooming. However, the production of stable, reproducible and safe formulations containing most of these ingredients remains a topic of discussion. Big effort is currently devoted in elucidating the interactions between beneficial microbes and skin. Studies show that the culture medium of these bacteria, like Lactobacilli, promotes antipathogenic and wound healing effects in the host. Molecules produced by bacteria and released in the medium can exert these effects. It can be postulated that bacteria interact with each other and skin cells, using complex network of molecules, the “postbiotics”, which represent a new class of bacteria derived factors, helpful in regularizing the skin microbiota balance, reinforcing skin defense, promoting barrier function and other beneficial effects. Due to their reproducible composition, organoleptic features, long shelf life, safety, handling and efficacy, using postbiotics is an elegant and efficient approach to provide the skin with microbial actives. Through a patented biofermentation process (PB Tech) KALIBIOME postbiotics for cosmetic applications were designed and produced starting from L. Paracasei, species known for its beneficial skin effects. KALIBIOME postbiotics are naturally produced and released by living microbes and extracted by a technique evading bacterial fragments or toxins presence.

In correlation to each of the above tests, analysis of skin microbiome variation were carried out before and after the treatment with Kalibiome and placebo through swab withdrawal of the skin bacteria on the treated areas. These analysis (metagenomic tests) were made through the use of 16S rRNA gene (V3V4 region) as phylogenetic marker to detect skin microbiome composition.

A scratch test was performed using EGF as control with analytic and photographic assessment of wounded fibroblasts repair.

In Vivo- Evaluation of photoaging

The postbiotics gave significant results in redensifying the dermis framework in skin echogenicity tests. Echogenicity is the ratio between the upper and lower dermis high frequency ultrasonography, used to estimate the protection against photoaging. The postbiotics treatment showed an increase by 12 folds higher than placebo (Fig.1) and a significantly visible dermis redensification in the digital image with larger white bands highlighting collagen expression increase (Fig. 2). According to the metagenomic tests, the subjects that reported increased skin redensification  showed significant variations of Prevotella and Faecalibacterium on the skin after the Kalibiome treatment with a positive correlation with Prevotella and a negative correlation for Faecalibacterium (Fig 2a). 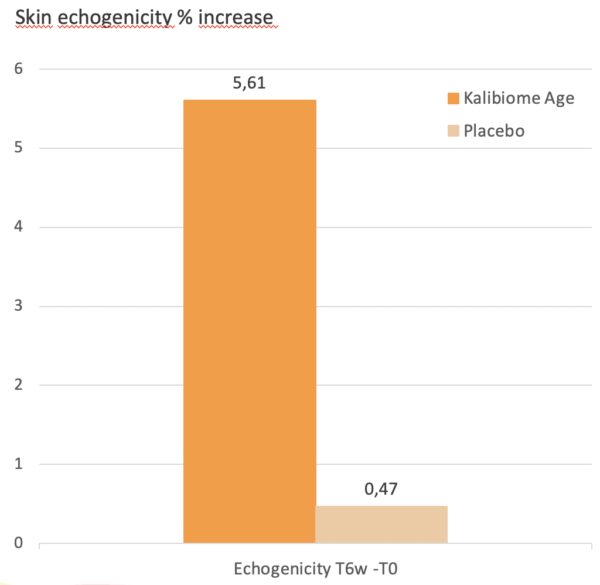 Figure 2a: Correlation Between Increased Redensification and Microbiome Regulation 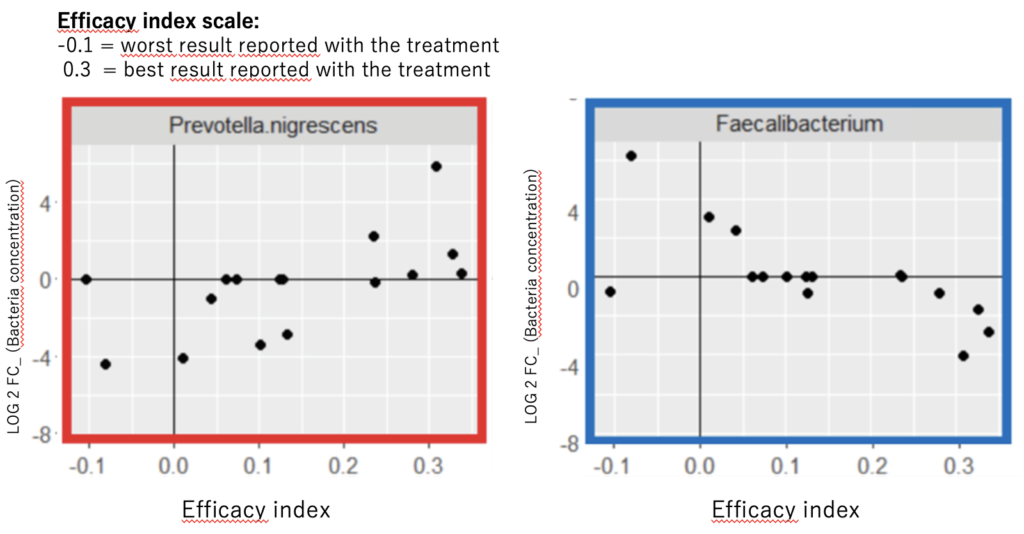 The postbiotics were tested in crow’s feet area to investigate effectiveness on wrinkle depth and width reduction. The treatment results show wrinkle depth significant decrease compared to the placebo, along with surface regularization as shown in Fig.3. According to the metagenomic tests, the subjects that reported the best results in terms of wrinkle depth and width (Rz and Ra), had significant variations of Stenotrophomonas  and Brevundimonas diminuta on the skin after the Kalibiome treatment with a positive correlation for both (Fig 3a).

Figure 3a: Correlation between wrinkle depth and width (Rz and Ra) reduction and microbiome regulation 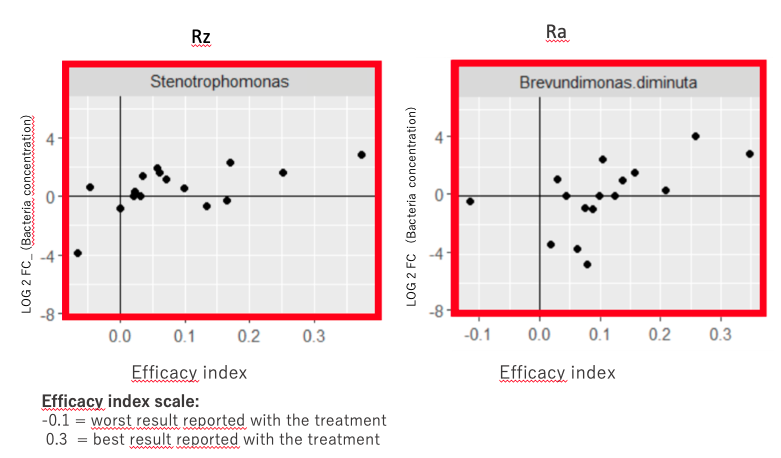 In Vitro- Skin regeneration: effects on Hyaluronic acid, proCollagen I and fibroblast

The postbiotics antiaging action is ascribable to the dualistic effect observed on skin targets like the epidermal keratinocytes hyaluronic acid involved in skin hydration, cells turnover, wound repair, and the procollagen I involved in dermis framework restoring (Fig.4). In both cases the postbiotics outperformed competing benchmark ferments.

The postbiotics show the same efficacy as EGF (Fig.5) in promoting fibroblasts migration after wound, with results visible after 24 h.

The postbiotics proved modulatory activity on pro-inflammatory cytokines (Fig.6) IL6 and CCL2 MCP-1 through a dose dependent expression reduction. Same pattern was observed with the proinflammatory chemokine IL8, whose expression is reduced vs control. The above mechanisms explain the skin redness decrease and photoaging effects detected in vivo.

The immune system modulation activity pattern confirms their use suitability in sensitive skin products. Compared to probiotics, recent studies suggest their lack of inflammation exacerbation after treatment of acutely inflamed gut tissue, endorsing their potential inclusion in a scenario of diversified medical treatments. 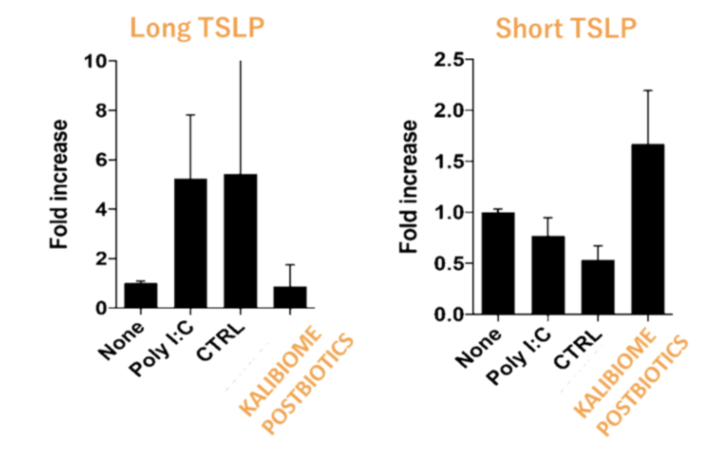 The postbiotics increase the expression of the tight junction zonula occludens-1 (ZO-1), key component involved in keratinocytes adhesion analyzed by immunofluorescence microscopy. The keratinocytes were treated with SLS and then with postbiotics vs control: the results show the postbiotics superior skin pores tightening and keratinocytes sealing, effects promoting decreased permeability to pathogens and environmental pollutants (Fig. 8).

In vitro- Interference with biofilm formation

The postbiotics inhibit the formation of S.Aureus biofilm, (Fig.9)  germ involved in inflammation diseases, like atopic dermatitis; they promote physical disruption of the pathogen biofilm formation, confirming recent studies results and suitability for applications where bacterial biofilm presence is matter of concern. 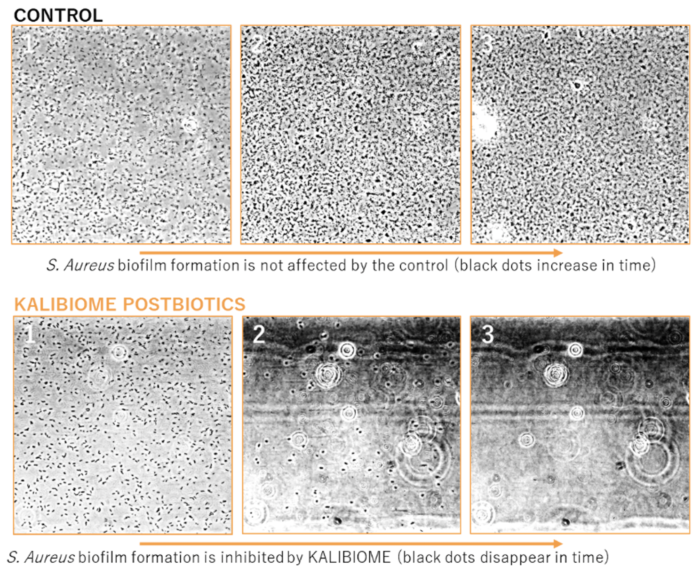 The oxidative stress decrease contributes to the immune system modulation acitivity, as it downregulates the activation of pathways involving the induction of lipid peroxidation, membrane disruption, protein denaturation that leads to nucleic acids damages, mithocondrial damage and oxidative explosion. These inflammation cascades are triggered at different physiological levels, as recent studies show and their negative modulation seems a promising soothing strategy for mucosal targets. 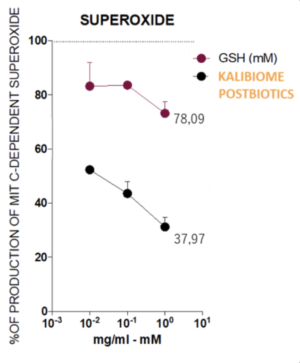 The postbiotics were tested on different parameters vs placebo formulation, showing in each case significant benefits (Tab.1). The skin redness decrease may be linked to immune system response to pollutants and cytokine modulation control, as previously shown.  The elasticity increase is likely related to the proven dermis redensification. The skin barrer function restoring and the hydration effect reported are linkable to the activity on tight junctions and hyaluronic acid production.

The combined immune system modulation and the anti-aging features position Kalibiome postbiotics as one of the deepest innovations in the field of microbiota care.

New studies in progress are aimed to extend the applications of this biotech solution.

Skin boosting, antiaging postbiotic ingredient that revitalizes the extracellular matrix, by increasing the synthesis of hyaluronic acid and collagen.

Postbiotics obtained through a patented biofermentation process.
Selected bio-tech active specific for the treatment of sensitive gums and periodontitis

Selected postbiotics obtained through a patented bio-tech process, finalized to keep the ecogenetic balance of commensal

Next article
Biomimetic Endorphin for Anti-wrinkle and Lifting

Biomimetic Endorphin for Anti-wrinkle and Lifting